You are here: Home / Entertainment / Celebrities / Manny Pacquiao vs Floyd Mayweather, Jr May 2, 2015 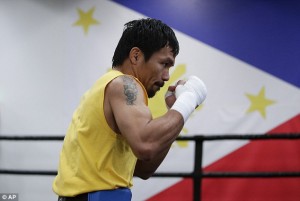 This is it! Its finally happening and hope nobody jinx this! The Pacquiao vs Mayweather boxing fight of the century!
On May 2, 2015 Saturday around 11 pm EST at Las Vegas MGM Grand Hotel and Casino, these 2 boxing legend will fight for the world to see who is the best.  Of course this post will be biased because I’m obviously rooting for Manny Pacquiao and i just hope he knocks down his opponent in 3 rounds and I will still be happy to pay just to see that even on PPV!  Both HBO PPV and Showtime PPV will show the fight and in Mexico the Mexican TV companies Televisa and Azteca have made an agreement to show the $300 million boxing fight for free in their country.